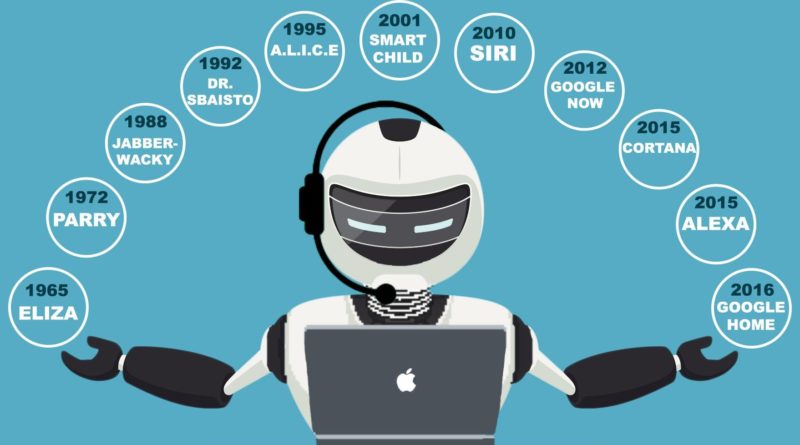 Chatbots have become an inevitable part of our lives. The evolution of chatbots from the early 1960s till date have been fascinating. They have been advancing in all aspects including features, functionalities and appearances. They have become more human-friendly as time progressed.

The conversational experience offered has become more interactive and personalised over years. From booking tickets to transferring money to accounts, chatbots have become one’s very own personal assistant. How have chatbots evolved through time? Let us have a look into its evolution.

Turing test is a test proposed by a Mathematician, Alan M Turing to determine whether the computer has the ability to think using an ‘imitation game’. If the computer can mimic human responses, it can be inferred to possess artificial intelligence. A Turing test is basically to determine if the speaker is speaking to a human or a machine.

ELIZA is considered to be the first chatbot in the history of computer science. It was created by Joseph Weizenbaum in the mid 1960s. Using pattern matching and substitution methodology, ELIZA was able to create an illusion of understanding and having an interaction with a real human being. ELIZA continues to be a source of inspiration for programmers and developers focused on artificial intelligence. But still, ELIZA was not able to clear the turing test.

PARRY became the next chatbot which attempted to stimulate a person with paranoid schizophrenia. It was created by psychiatrist Kenneth Colby in 1972. It is an advanced version of ELIZA with a conversational strategy and was often described as ‘ELIZA with attitude’. However, PARRY could not clear the turing test.

In 1984, Racter came into picture. It was shorthand  for Raconteur and  was written by William Chamberlain and Thomas Etter.  A more interactive version of Racter was put forward by Mindscape Inc. Racter is said to have written a 120-page book, ‘ The Policeman’s Beard is half constructed’.  This claim does not have satisfactory proof to substantiate it.The program that wrote the book, was not released to the general public.

Jabberwacky is a chatbot created by British programmer Rollo Carpenter in 1988. It was one of the earlier attempts in creating an AI through human interaction. It aims to simulate natural human chat in an interesting, entertaining and humorous manner.  In some ways,  it models the way humans learn language, facts, context and rules. Its main aim was to move from a text based system to a voice operated one.

Dr. Sbaitso was an artificial intelligence program published by Creative Labs in 1992. Dr.Sbaitso had improved pattern recognition and substitution programming capabilities. It could speak with proper inflection and grammar but the digitized sound was really weird, which made it much more popular.

ALICE is Artificial Linguistic Internet Computer Entity, originated in 1995. It is a Natural Language Processing chatbot which converses with humans using heuristic pattern matching rules to the input. The program works with the XML schema known as artificial intelligence markup language, which helps specify conversation rules. It is one of the strongest chatbots and has won the Leobner prize for its ability to talk with humans. However, it was not able to pass the Turing test.

SmarterChild was an intelligent bot developed by ActiveBuddy, Inc. in 2001. It was widely distributed across SMS Networks and had many interactive features like quick data access and fun personalised conversations.  It was also the possessor of Apple Siri.

IBM Watson chatbot came into picture in the year 2006. It was initially developed to compete with a TV show “JEOPARDY” which it won in 2011 where it defeated two of the former champions. It was helpful to reveal insights from large amounts of data using natural language processing and machine learning.

Siri is a virtual assistant formed by Apple for iOS in 2010. This intelligent personal assistant serves as a learning navigator that uses a natural language UI. It paved the way for the future chatbots and personal assistants. It could answer questions and perform web service requests effectively. It was a remarkable contribution to the chatbot evolution.

Google launched google now in Android 4.1 in 2012. It was a feature of Google Search for Android and iOS. Google now predicted the information that the users might need and brought it to them in the form of informational cards. It employs a natural language user interface to answer questions and make recommendations for the user. It also performs various actions by delegating requests to a set of web services. Google Now was initially a way to get contextually appropriate information based on location and time of the day. It evolved to become much more complicated and elaborate, with a broad range of content categories delivered on cards. The Google Now branding is not used in the present days, but its functionalities are still used in the Google app.

Cortana is a virtual assistant developed by Microsoft in the year 2014. It uses the Bing search engine to perform various tasks given to it. Cortana can perform tasks like reminders based on time, places, or people, send emails and texts, create and manage lists, chit-chat,  play games, and find facts, files, locations, and information. In 2007, Microsoft announced that Cortana has a consumer third-party skills capability. It is currently available in more than 7 languages. It became directly integrated into both Windows phone devices and Windows 10 PCs.

Alexa is a virtual assistant AI technology developed by Amazon in 2016. It was first used in Amazon Echo smart speakers. This new generation chatbot was able to make voice interaction. It uses a natural language processing algorithm to receive, recognise and respond to voice commands effectively. It is also capable of making to-do lists, streaming podcasts, setting alarms and could also provide real time information. It could implement a home automation system as it could control several smart devices. The extraordinary features of alexa made it stand out among the other existing virtual assistants. More than 100 million alexa enabled devices were sold by 2019 which marked it as a very successful intervention.

Google Home is a voice-activated speaker which marked the debut of the google assistant in 2016. It was deployed into various smartphones in 2016. It was an advanced version of Google now. It was now able to engage in two-way conversations. Apart from the old features, this device will also be able to identify objects, gather visual information and even identify songs.

In April 2016, Facebook announced a bot platform for Messenger, including an API to build chat bots to interact with users. Messenger serves as a social networking app where users can send messages and exchange photos, videos, stickers, audio, and files, as well as react to other users’ messages and interact with bots. Telegram also opened its app for developers to build and deploy bots in 2015. These messaging platforms are one of the major reasons for chatbots having an edge in the recent years. Now, almost every popular platform including Whatsapp, Slack, We Chat, IMO offers the facility to build a chatbot.

Recently, Natural Language processing Chatbots have made a very significant progress in terms of understanding the emotions of the user. Advanced Natural Language Processing capabilities can even rectify spelling and grammatical errors and allow the chatbot to interpret the message intended by the user despite the mistakes. It helps to provide context and meaning to text-based user inputs so that the best response can be given to the user.

Chatbots have emerged as a technology that could bridge the gaps between business communication channels, and that can help deliver a better online experience to consumers. They are becoming an essential part of the current workplace, and it can be seen that many popular brands who have already designed chatbots have an advantage over those who are still left to move towards automation .

With new advancements in the field of Artificial Intelligence, Machine Learning and Natural Language Processing, Chatbots are becoming more and more intelligent.  Chatbots have a long journey ahead which will unveil its intense potential. Thus, we can be sure that chatbots have a splendid future.